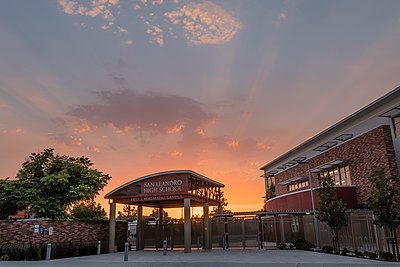 San Leandro High School is a four-year public high school in San Leandro, California, USA. The school is a member of the San Leandro Unified School District. In 2007, the School District bought land for a new building to house the freshman class to relieve overcrowding at SLHS. This move has met with some opposition due to the separation of the freshman class from the rest of the school. The freshman (9th grade) campus is named the "Fred T. Korematsu Campus", after civil rights activist Fred Korematsu who had significant connections to San Leandro. As of the 2017-2018 school year, the campus had its status removed as a 9th grade only campus and now houses the math and foreign language department for all grade levels, with some exceptions.

San Leandro High School is accredited by the Western Association of Schools and Colleges. Students are allowed to take courses either as College Preparatory(CP), Honors(H) or Advanced Placement(AP).

We are lifelong learners. We are leaders in training. Don't be part of the problem. Be part of the solution. Failure is not an option. Respect is a sign of strength. Discipline yourself so no one else has to. Stay calm at all times. If you have a goal, nothing is impossible. We come from greatness.

In 2011, with funding from the voter-approved Measure B school bond, the new Arts Education Center opened. The building contains a state of the art green screen room and control room, two sound booths, five classrooms, and a 552-seat performing arts theater.

San Leandro High School was recognized by the California Department of Education in 1996 as a California Distinguished School.

In 2018, the College Board Advanced Placement named the San Leandro Unified School District a District of the Year for being the national leader among medium-sized school districts in expanding access to Advanced Placement Program (AP) courses to high school students while simultaneously improving AP Exam performance. The San Leandro Unified School District was one of 447 school districts across the U.S. and Canada that achieved placement on the annual AP District Honor Roll.

San Leandro High School has many clubs and organizations including:

San Leandro also has three academies in partnership with the California Partnership Academies program. These academies are: