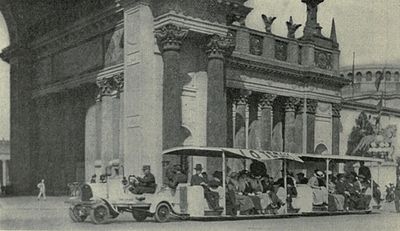 Fageol Motors was a United States manufacturer of buses, trucks and farm tractors.

The company was founded by Rollie, William, Frank and Claude Fageol in 1916 to manufacture motor trucks, farm tractors and automobiles in Oakland, California. It was located next to Oakland Assembly, then a Chevrolet factory originally built in 1917 by William Durant, which later became part of General Motors.

Fageol produced two luxury automobiles, but production was halted when the supply of Hall-Scott SOHC six-cylinder engines was diverted to build airplanes for the World War I effort.

The first Fageol farm tractor was a re-labeled Hamilton Walking Tractor, designed and built by Rush E. Hamilton of Geyserville, California. As a result of the many tractor performance trials of the day, the tractor was redesigned to be more compatible with the needs of the West Coast. The Fageol version was designed by a team led by Horatio Smith with the cooperation of Hamilton. In about 1923, the tractor business was sold to the Great Western Motors Company of San Jose, with Hamilton and Smith joining Great Western.

In 1921, Fageol became the first company to build a bus from the ground up. This new style bus was initially called "Safety Bus". The goal was to build a bus that was resistant to overturning when cornering. It had a wide track, and was lower to the ground for ease of entry and exit. Following the successful introduction, the vehicles were renamed "Safety Coaches", a term intended to imply greater value.

Fageol trucks were well built and became favorites of the industry, owing in part to the dual range, mid-mounted transmission. This gearbox allowed for extreme ranges in gearing for slow speed heavy hauling and for highway speeds with lighter loads. These vehicles were easily spotted by the large number "7" painted on the front of the radiator.

The Fageol brothers left the company in 1927 to form the Twin Coach Company, manufacturing buses in Kent, Ohio. The leadership was taken over by company president L.H. Bill, but during the Great Depression the company went into receivership, and the bank assumed control and re-organized the company under the name Fageol Truck and Coach. In 1938, T. A. Peterman bought the factory and its contents. In 1939, the first Peterbilt was produced.

The South Australian Railways operated a number of Fageol buses. In 1932 that system introduced into service the first of four railcars converted from road buses at Islington Railway Workshops. These vehicles initially operated on the SAR 3 ft 6 in (1,067 mm) gauge Eyre Peninsula Railway, however some were transferred to operate on the Kingston to Naracoorte line, prior to the line's conversion to 5 ft 3 in (1,600 mm) broad gauge. Because the buses were not designed for rail use, the ride was very rough. The last railcar was condemned in 1961.

The brothers had originally sold the Hamilton Walking Tractor, rebranded as the Fageol Walking Tractor, without much success. They were contracted to solve a transportation issue at the 1915 Panama Pacific Exposition. The fair covered over 600 acres, with two and a half miles of water front property. From February to December over 18 million people visited the fair. The solution provided by the brothers ended up being the Fageol Auto Train, also called the Trackless Train, powered with a Ford motor, pulling two or three low to the ground 20 passenger open-sided cars. The financial backer chose to use a different spelling, for ease of pronunciation, so the company was registered as The Fadgl Auto Train Inc.

This led to the founding of the Fageol Motors Company of Oakland. The company reached an agreement with Rush Hamilton of Geyserville, California to manufacture a tractor with spiked rear wheels.

In 1950 the company manufactured a unique truck, the TC CargoLiner – touted as "A Trailer Without A Tractor". In 1953 the Twin Coach Company was awarded a patent for what would become the standard in straight truck design. The inventor was Louis J Fageol. The company produced 1 1/2 ton, 2 1/2 ton, 3 1/2-4 ton, and 5-6 ton trucks.

Since the founding of Fageol Motors Company, there was a plan to build automobiles. Frank R. and William B. Fageol with Louis H. Bill built and marketed what was to be the most expensive luxury car of the time using the Hall-Scott aircraft engine. Marketed as the "Fageol Four Passenger Touring Speedster" only three were known to have been produced before the government took over the engine manufacturing plant to build war planes, ending production. Other cars built by the company were:

Fageol produced buses until 1953, when the bus-manufacturing portion of the Fageol Twin Coach Company was absorbed by Flxible.