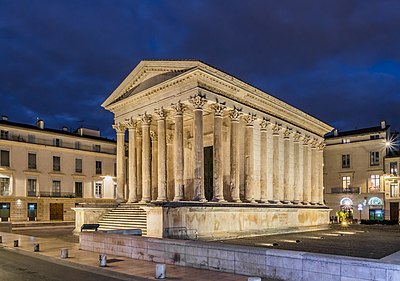 The Maison Carrée (French pronunciation: ​[mɛzɔ̃ kaʁe]; French for "square house") is an ancient Roman temple in Nîmes, southern France; it is one of the best preserved Roman temples to survive in the territory of the former Roman Empire.

The Maison Carrée inspired the neoclassical Église de la Madeleine in Paris, St. Marcellinus Church in Rogalin, Poland, and in the United States the Virginia State Capitol, which was designed by Thomas Jefferson, who had a stucco model made of the Maison Carrée while he was minister to France in 1785.

In about 4-7 AD, the Maison Carrée was dedicated or rededicated to Gaius Caesar and Lucius Caesar, grandsons and adopted heirs of Augustus who both died young. The inscription dedicating the temple to Gaius and Lucius was removed in medieval times. However, a local scholar, Jean-François Séguier, was able to reconstruct the inscription in 1758 from the order and number of the holes on the front frieze and architrave, to which the bronze letters had been affixed by projecting tines. According to Séguier's reconstruction, the text of the dedication read (in translation): "To Gaius Caesar, son of Augustus, Consul; to Lucius Caesar, son of Augustus, Consul designate; to the princes of youth." During the 19th century the temple slowly began to recover its original splendour, due to the efforts of Victor Grangent.

The Maison Carrée is a classic example of Vitruvian architecture as it is nearly an exact replica of a Tuscan style Roman temple described in the writings of the famous architect Vitruvius. Raised on a 2.85 m high podium, and at 26.42 m by 13.54 m forming a rectangle almost twice as long as it is wide, the temple dominated the forum of the Roman city of Nîmes, in what is now southern France. The façade contains a deep portico or pronaos that is almost a third of the building's length and is richly decorated in terms of its columns and capitals. This deep porch emphasizes the temple front, and distinguishes the layout from ancient Greek temples. It is a hexastyle design with six Corinthian columns under the pediment at either end, and pseudoperipteral in that twenty engaged columns are embedded along the walls of the cella. Above the columns, the architrave is divided into three levels with ratios of 1:2:3. Egg-and-dart decoration divides the architrave from the frieze. On three sides the frieze is decorated with fine ornamental relief carvings of rosettes and acanthus leaves beneath a row of very fine dentils. However, the refinement of the decorative carvings on the building is not nearly as precise and mathematically perfect as the decoration on the Parthenon or other Greek temples.

A large door (6.87 m high by 3.27 m wide) leads to the surprisingly small and windowless interior, where the shrine was originally housed. This is now used to house a tourist oriented film on the Roman history of Nîmes. No ancient decoration remains inside the cella.

The building has undergone extensive restoration over the centuries. Until the 19th century, it formed part of a larger complex of adjoining buildings. These were demolished when the Maison Carrée housed what is now the Musée des Beaux-Arts de Nîmes (from 1821 to 1907), restoring it to the isolation it would have enjoyed in Roman times. The pronaos was restored in the early part of the 19th century when a new ceiling was provided, designed in the Roman style. The present door was made in 1824.

It underwent a further restoration between 1988–1992, during which time it was re-roofed and the square around it was cleared, revealing the outlines of the forum. Sir Norman Foster was commissioned to build a modern art gallery and public library, known as the Carré d'Art, on the far side of the square, to replace the city theater of Nîmes, which had burnt down in 1952. This provides a startling contrast to the Maison Carrée but renders many of its features, such as the portico and columns, in steel and glass. The contrast of its modernity is thus muted by the physical resemblance between the two buildings, representing architectural styles 2000 years apart.

Though Maison Carrée is in no way a modern example of architecture, its ability to project and influence is unmatched. In fact, for someone such as Thomas Jefferson, the United States’ third president and a self-taught architect, the building was especially influential and important. Jefferson first laid eyes on Maison Carrée in the spring of 1787 while visiting southern France. He stared at the building for hours in awe of its construction and craftsmanship. He was on a mission to find architectural inspiration and believed that the new nation of America desperately needed public buildings that represented a specific message. Jefferson turned to ancient architecture for said inspiration, though he was not interested in directly copying the layout of these famous buildings. Instead, he wished to adapt the classical style of the Greeks and Romans into a new context suited for the United States. Ultimately, he was able to reinvent the ancient Roman temple for civic purposes. Originally, Roman temples were very dark and lacked external lighting. Jefferson added windows to his versions and used the rectangular structure normally intended to worship gods as a new space to house the interior of the government. It is clear when analyzing Thomas Jefferson’s architectural works that he was deeply influenced by Greek and Roman architecture. These reinvented classical elements are very evident in buildings such as Monticello and the University of Virginia or the Virginia State Capitol.