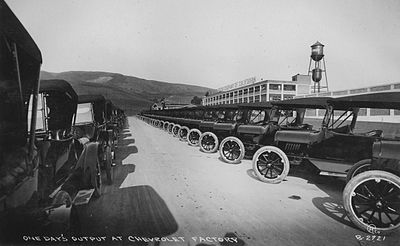 The plant stopped producing automobiles for commercial use on January 30 1942 until August 20 1945, and contributed to the war effort during World War II producing munitions, Pratt & Whitney aircraft engines, 90mm guns and billions of pounds of aluminum forgings, magnesium castings and grey iron castings. The Chevrolet Fleetline remained in production during the war but only for military uses. It received the United States Army-Navy "E" Award for operational excellence. It was approximately 6 miles east of the former Naval Air Station Alameda.

When commercial manufacturing resumed, Chevrolet's most well known vehicles during the 1950's were built at the facility, to include the so called "Tri-Five" 1955-1957 Chevrolet coupes, sedans and station wagons. The factory was recognized that the facility needed to be upgraded for more modern manufacturing methods and in the summer of 1963, it was replaced by Fremont Assembly. It is now the Eastmont Town Center at the corner of 73rd Street and MacArthur Blvd.

Some of the models produced at the plant included: