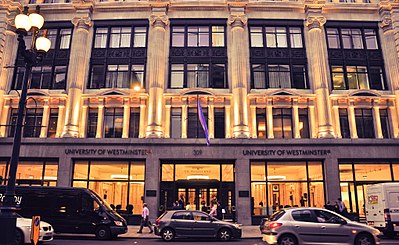 The Regent Street Cinema is a historic repertory cinema located on Regent Street, London. Opened in 1848 and regarded as "the birthplace of British cinema", the cinema featured the first motion picture shown in the United Kingdom. It was closed from 1980 to 2015.

The Regent Street Cinema was first opened in 1848 and is housed in the flagship building of the Royal Polytechnic Institution (now University of Westminster). When it was first opened, it was used as a theatre. In late February in 1896, the cinema played a short movie by the Lumière Brothers. It was the first motion picture shown in the United Kingdom. In 1951, La Vie Commence Demain (Life Begins Tomorrow), an X-rated film because of its war imagery, was shown. The cinema was the first in the United Kingdom to show an X-rated film.

Although the cinema continued to screen films for another eighty-four years after the original Lumière Brothers footage, the cinema was closed for thirty-five years; from 1980 to 2015. Throughout most of this time, the cinema was used as a lecture theatre. In 2012, the University of Westminster began a project to restore the building. The restoration project took three years to complete and cost £6.1 million. By February 2014, £4 million was raised through an appeal, but another £2 million was needed. Out of the £6.1 million, £1.5 million was awarded through a Heritage Lottery Fund grant and £2m was donated by the Quintin Hogg Trust. Celebrities, including prior BBC Radio 4 host Sandi Toksvig and filmmaker Asif Kapadia, backed the appeal. It was hoped the cinema would reopen in 2014.

The Art Deco features of the building's 1920 design were restored, along with the 1936 John Compton organ and the dome-like ceiling. Upon reopening, a documentary of the managers of the English rock band The Who, titled Lambert and Stamp, was screened. Shira MacLeod, the director of the Regent Street Cinema, said it is the only cinema in the United Kingdom that can screen films in 16 mm, 35 mm, Super 8 and 4K, allowing the cinema to show films that "have been in archives for many years".

The cinema is a Grade-II listed building.