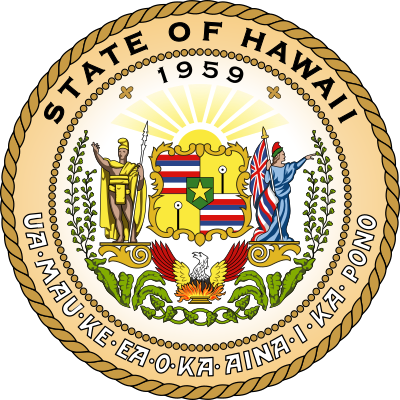 The Hawaii Senate is the upper house of the Hawaii State Legislature. It consists of twenty-five members elected from an equal number of constituent districts across the islands and is led by the President of the Senate, elected from the membership of the body, currently Ron Kouchi. The forerunner of the Hawaii Senate during the government of the Kingdom of Hawaii was the House of Nobles originated in 1840. In 1894, the Constitution of the Republic of Hawaii renamed the upper house the present senate. Senators are elected to four-year terms and are not subject to term limits.

Like most state legislatures in the United States, the Hawaii State Senate is a part-time body and senators often have active careers outside government. The lower house of the legislature is the Hawaii House of Representatives. The membership of the Senate also elects additional officers to include the Senate Vice President, Senate Chief Clerk, Assistant Chief Clerk, Senate Sergeant at Arms, and Assistant Sergeant at Arms. The Hawaii Senate convenes in the Hawaii State Capitol in Honolulu.

From 2016 (when Sen. Sam Slom, Hawaii's sole Republican state Senator, was defeated in his bid for reelection) to 2018, the Democratic Party held all 25 seats in the Hawaii Senate. This made the Hawaii Senate the only state legislative chamber with no opposition members (excluding the officially nonpartisan Nebraska Legislature). It was the first time since 1980 (when the Alabama Senate and Louisiana Senate were all-Democratic) that any state legislative chamber had been completely dominated by a single party.

Past composition of the Senate