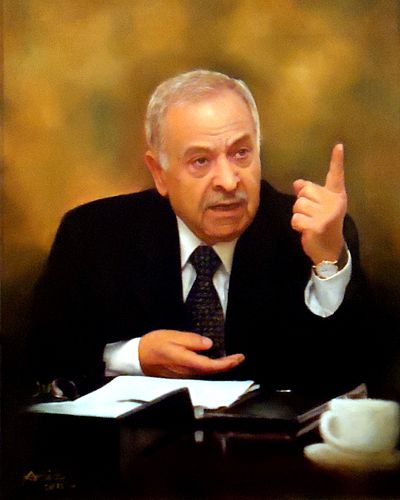 Haider Mahmoud (Arabic :حيدر محمود) is a poet and a Jordanian nationalist of Palestinian origin. He was born in Haifa in 1942. His family fled their home in the aftermath of the 1948 Arab-Israeli war. He studied in Amman before pursuing his higher education in the United Kingdom and the United States.

Mahmoud worked in journalism and the media, he was also Jordan's Ambassador to Tunisia, and he later held the culture portfolio in the Jordanian government. He was appointed as a member of the 26th Senate of Jordan on 24 October 2013. He was reappointed to the 27th Senate on 27 September 2016.

A poem he wrote in early April 1989 about the social injustices facing ordinary citizens was one of the triggers of the civil unrest that took several Jordanian cities later that month. Mahmoud held the position of Advisor to the Prime Minister at the time, he was sacked and ordered to be imprisoned by Martial Law decree, but was released on the same day by direct order from King Hussein.

Mahmoud's works were published in several languages including Spanish, Japanese, Korean, French and Serbian, and his works are taught in the Jordanian curriculum in both the School and University levels. He was granted an honorary doctorate from the World Academy for Culture and Arts in the Republic of China in 1986.

Mahmoud was granted several Arab and International awards and medals, including the King Abdullah II Award for Innovation in the Field of Literature (Jordan, 2004), The Independence Medal of First Order (Jordan, 1991), Medal of the Republic of the Supreme Order (Tunisia, 1999), Ibn Khafaja Award for Poetry (Spain, 1986).

He currently writes a weekly column in the Jordanian newspaper Ad-Dustour.