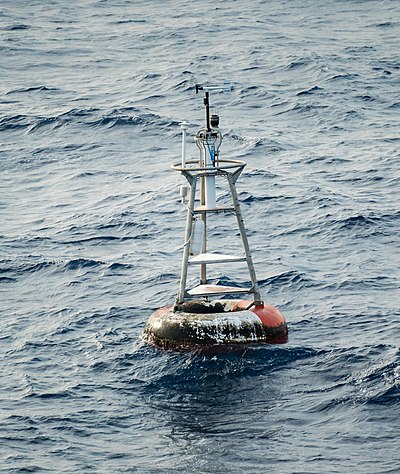 Null Island is the name used to refer to the point on the Earth's surface where the Prime Meridian and the Equator intersect, at zero degrees latitude and zero degrees longitude (0°N 0°E). Using the WGS84 datum, this point is located in international waters in the Gulf of Guinea, in the Atlantic Ocean, off the coast of West Africa. The point is marked with a permanent buoy.

The name "Null Island" jokingly refers to the suppositional existence of an island at that location, and to a common cartographic placeholder name to which coordinates erroneously set to 0,0 are assigned in placename databases in order to more easily find and fix them. The nearest land is a small islet offshore from Achowa Point, Ghana, between Akwidaa and Dixcove at 4°45′30″N 1°58′33″W, 307.8 nmi (354.2 mi; 570.0 km) to the north. The depth of the seabed beneath Null Island is around 4,940 metres (16,210 ft).

In terms of computing and placename databases, the coordinates for Null Island were added to the Natural Earth public domain map dataset c. 2010–2011, after which the term came into wide use (although there is evidence of it being used previously). Since then, the "island" has through fiction been given a geography, history, and flag. Natural Earth describes the entity as a "1 meter square island" with "scale rank 100, indicating it should never be shown in mapping". The name "Null" refers to the two zero coordinates, as null values (indicating an absence of data) are often coerced to a value of 0 when converted to an integer context or "no-nulls allowed" context.

The location is used by mapping systems to trap errors. Such errors arise, for example, where an image artifact is erroneously associated to the location by software which cannot attribute a geoposition, and instead associates a latitude and longitude of "Null,Null" or "0,0". As reported in January 2018 by Bellingcat, other data mapped to the location include activity events from the Strava fitness-tracking app, apparently mapped to the location due to users entering "0,0" coordinates to disguise their real locations.