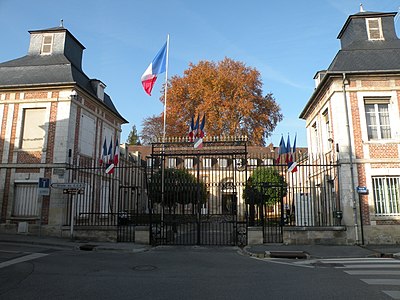 Oise ( WAHZ; French: [waz] (listen); Picard: Oése) is a department in the north of France. It is named after the river Oise. Inhabitants of the department are called Oisiens (French: [wazjɛ̃]) or Isariens, after the Latin name for the river, Isara. It had a population of 829,419 in 2019.

Oise is one of the original 83 departments created during the French Revolution on March 4, 1790. It was created from part of the province of Île-de-France and Picardy.

After the coalition victory at Waterloo, the department was occupied by British troops between June 1815 and November 1818.

In March 2021, local Member of Parliament Olivier Dassault was killed in a plane crash.

Oise is part of the current region of Hauts-de-France and is situated 35 km north of Paris. It is surrounded by the departments of Somme, Aisne, Seine-et-Marne, Val-d'Oise, Eure, and Seine-Maritime.

The president of the Departmental Council is Nadège Lefebvre, elected in 2017.

The major tourist attraction of the department is the Parc Astérix, which opened in 1989. Other interesting sites are Beauvais Cathedral, the Chateau de Pierrefonds, restored by Viollet-le-Duc, and the art collection of the Château de Chantilly, which is one of the largest outside Paris.

Oise is twinned with Bedfordshire in England. It is also twinned with the Indonesian regency of Karanganyar and the Chinese provinces of Shandong and Zhejiang.

One of the villages along the river Oise is Auvers-sur-Oise, famous for having been visited by several impressionist artists. This is where Vincent van Gogh spent his last 70 days and is his and his brother Theo's resting place.