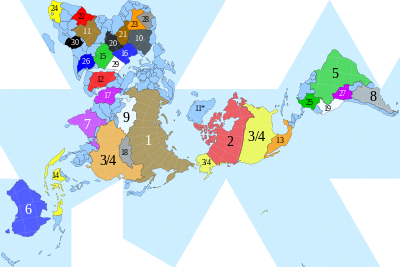 This is a list of the world's countries and their dependent territories by area, ranked by total area.

Entries in this list include, but are not limited to, those in the ISO 3166-1 standard, which includes sovereign states and dependent territories. All 193 member states of the United Nations plus the 2 observer states are given a rank number. Largely unrecognised states not in ISO 3166-1 are included in the list in ranked order. The areas of such largely unrecognised states are in most cases also included in the areas of the more widely recognised states that claim the same territory; see the notes in the "notes" column for each country for clarification.

Not included in the list are individual country claims to parts of the continent of Antarctica or entities such as the European Union that have some degree of sovereignty but do not consider themselves to be sovereign countries or dependent territories.

Data is taken from the United Nations Statistics Division unless otherwise noted.

Countries and dependencies by area

The charts below are based on the CIA World Factbook as of February 15, 2005.

Sovereign states with areas greater than 100,000 km2 are shown in green. In addition, non-sovereign territories are included for purposes of comparison, and are shown in gray. Areas include inland water bodies (lakes, reservoirs, rivers). Claims to parts of Antarctica by various countries are not included.