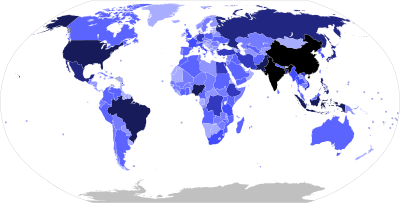 This is a list of countries and dependencies by population. It includes sovereign states, inhabited dependent territories and, in some cases, constituent countries of sovereign states, with inclusion within the list being primarily based on the ISO standard ISO 3166-1. For instance, the United Kingdom is considered as a single entity, while the constituent countries of the Kingdom of the Netherlands are considered separately. In addition, this list includes certain states with limited recognition not found in ISO 3166-1. Also given in percent is each country's population compared with the world population, which the United Nations estimates at 7.88 billion today.

Figures used in this chart are based on the most up to date estimate or projections by the national census authority where available, and are usually rounded off.

Where updated national data are not available, figures are based on the projections for 2021 by the Population Division of the United Nations Department of Economic and Social Affairs.

Because the compiled figures are not collected at the same time in every country, or at the same level of accuracy, the resulting numerical comparisons may create misleading conclusions. Furthermore, the addition of figures from all countries may not equal the world total.

Sovereign states and dependencies by population

Note: A number rank is assigned to the 193 member states of the United Nations and the two observer states to the United Nations General Assembly. Dependent territories and constituent countries that are parts of sovereign states are not assigned a numbered rank. In addition, sovereign states with limited recognition are included, but not assigned a number rank.